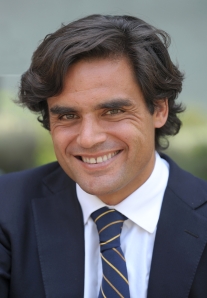 Juan Jose Güemes (1969) joined IE Business School in March 2010, as Chairman of the Center for Entrepreneurship and Innovation, after seventeen years of intense political activity. He had previously served in a broad range of government departments, including tourism, finance and employment, gender policies, and health. Since January 2.012, he is also IE VP of Economic Affairs

Güemes holds a Bachelor’s Degree in Economics and Business Administration (Universidad Complutense, Madrid, 1992) and a Master in Financial Markets (Universidad San Pablo CEU, Madrid, 1993). He began his career as an analyst at the Central Bank of Spain in 1991, before serving as Economic Adviser to Spain’s Popular Party in the Spanish Parliament from 1993 to 1996. He later served as advisor to the Deputy Prime Minister and Minister of Finance, who appointed him Deputy Director of his Cabinet in 1998.

In the year 2000 Juan Jose Guemes was appointed General Secretary of Tourism, being responsible for the international promotion of Spain as a tourist destination. In the three years he headed tourism in Spain, he modernized the country’s brand image and promoted a strategy to take Spanish tourism into new markets and products. During his term of office the State Society for Tourism Information Management was created to promote Spain online. Today, the Spanish Tourist Board is a leader in the use of Internet for the promotion of tourist destinations and tourist products.

Güemes joined the Madrid Regional Government as Regional Minister for Employment and Diversity in 2003. He developed a pioneering approach to promoting equal opportunities for men and women, including the LiderA program, designed to help women gain access to senior management positions in companies.

He was appointed Madrid region´s Minister for Health in 2007. During the three years he held this position he opened eight new hospitals, three medical schools and launched key biomedical research initiatives. Further achievements during his time in the public health sector include fostering partnerships between public and private health organizations, the introduction of major innovations in hospital management and the freedom to choose among different health services.